Unsurprisingly, my little brother’s death has taken the wind out of my sails.  We had been talking a lot after my visit last summer, and he was going to be a big part of my sabbatical plans.  When I was still in shock, it never crossed my mind to consider deviating from my original plans, and even after the gravity of the situation began to be felt, I felt so angry, and cheated, and robbed that I wanted to follow through with my plans.  Because fuck you, world.

But the truth is my heart’s not in it.  In fact, my heart hasn’t been in a lot over the last few months, and even things that normally bring me joy have felt flat.  I haven’t been exercising much (and the fact that my clothes are a little too snug is testament to that), and the dark, cold, Scottish winter has seen me go into a sort of hibernation where I have an excuse to stay indoors, out of sight, and grieve by ugly crying whilst listening to 1990’s music and looking through old photos.  Although there have been pockets of light, I have been neglecting not only my body (which, considering my recent diagnosis I should be taking better care of), but also some of my adult responsibilities, as well as some of my hobbies.  Writing hasn’t just taken a back seat, it has been shelved.

Despite having a cacophony of thoughts whirring around in my head, whenever I sit down to write there is only white noise to match the blank sheet of paper in front me.

I remember when I was a teenager and smoked pot for the first time while my parents were out of town, I had a panic attack; my heart was racing, my vision went fuzzy, and I was convinced I was going to die.  My friend Adam tried to calm me down, and he managed to do this by giving me a notebook and telling me things to draw to keep my mind occupied.  Dumb things, like an elephant on roller-skates doing a hula dance, or our boss at the time (we both worked at the same hotel) as a drag queen.  Well, as it turns out, drawing pictures (that display a distinct lack of artistic talent) seems to still have the ability to quieten my mind, and I’ve found it a cathartic way to start working through my feelings.  If you have any interest into what it’s like in my mind right now, you can find out here. 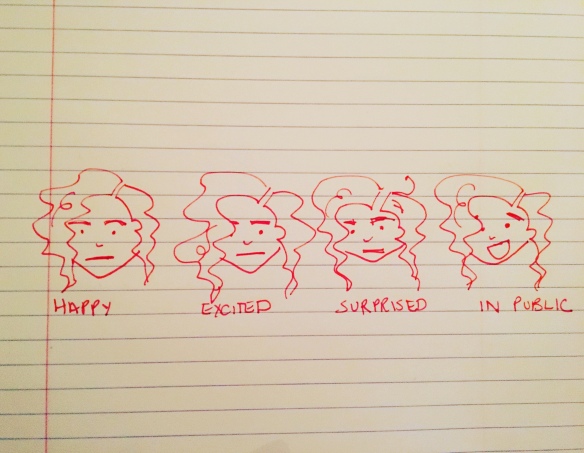 So what’s happening in April?  Well, I still have my one-way ticket to California, and I intend to be on that flight, but my hiatus from work will be on a much, much smaller scale for the time being.  I do think it’s important to take a little time to head into the wilderness and be alone to work through things without the outside stresses of work and social commitments, and take a little time to be with my family, but if I’m being honest with myself (and realistically looking at my decimated bank account – thanks a lot, reckless Rachel), I’d be better off hunkering down to save up for when my desire to take flight returns.

Hi. I'm Rachel and I made 2012 the year I got back into running. My aim was to collect as many success-nuggets as possible so that I could display them in my home and feel smug when I invited people round for board games and such. Since staring this blog, I have picked up a knee injury which has essentially limited my running to nil. What has blossomed in the wake of my love of running is an affair with cycling, which is currently in the exciting and passionate stages of the relationship.

I really appreciate when people take time to read the blog, especially complete strangers. Say hi! Let me know you were here! I'll probably get bored of stalking you in a week or so, so I'm totally harmless. Totally. I am the only person in my immediate family who has never been arrested, so I'm obviously a good apple.

If you want to get in touch, you can get me on the e-mail address below. I'm not interested in promoting your crap on my blog, unless you're going to shout me a carbon bike so my friends can stop ripping on my "heavy" steed:

Error: Twitter did not respond. Please wait a few minutes and refresh this page.