Running for the second time, the Etape Royale 100 mile sportive was an event I hesitated to enter for a few reasons, chiefly the hefty £70 entry fee (though considering the cost of having a closed road event, and seeing just how well organized the day was, it was clear to see where much of the money had gone), and the fact that it was mighty in both length and elevation, advertising a quad-searing 9829 feet of total ascent, and giving cyclists the opportunity to tackle the Queen’s View, the Suie, the Cabrach, the Lecht, and – finally – Gairnsheil with command of the entire road.

A third reason was the unpredictability of Scotland’s weather, so it was with great relief that I awoke at the AirBnB I had been staying at with Roz in Tarland at 04:00 on Sunday morning to step outside and witness a serene, shadowy view of farmland bathed in the pale glow of the harvest moon, the world caught in the eerie windless, stillness of an eclipse under the barely flickering stars.  I was, for a brief moment, under the spell of the moonlight, immune to the morning chill.

‘Why the fuck are you making me do this?’ – Roz

Wading through overgrown grass in the parking area as the sun threatened to peek over the horizon, Roz and I went through the familiar routine of preparing our bikes and ourselves for the day’s task before mustering at the portaloos (though not glamorous, a convenient meeting point) to wait for Sarah, Natalie, and Emma, as we planned to start off as a group and ride together until the third food stop at Rhynie.

With some trepidation, we pushed through the throngs of lycra clad shapes towards the starting gantry, beginning in Wave C, and quickly tucked in behind a small, quick group of men.  The course was reasonably flat for the opening 12 or so miles, and we clung onto wheels in front of us until the first climb at the Queen’s View, a not-too-severe wake-up call for the legs, but a very early indication that once the course hit the bigger hills our plan of riding together might unravel.

Roz and Emma were both having bad days on the bike, while Sarah and Natalie were feeling great.  We regrouped at the Rhynie feed station about 60km into the course having summited the ‘warm-up’ hills, and spirits were still reasonably high. 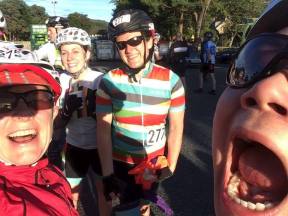 The next stage involved climbing the Cabrach, which again felt a bit underwhelming, before the descent into Dufftown and the next feed station.  I knew that what was to follow was an 18 mile uphill slog to Tomintoul, having experienced it a few weeks prior during the Audax, so I had some homebakes and energy drink, preparing myself for a particularly draining stint in the saddle.  It was here that Sarah and Natalie flew ahead (eventually finishing 12th and 13th female), and while my cruise control saw me cycling alone slightly ahead of Roz and Emma, I made it a point to wait for them at feed stations and summits, as Roz will confirm that it is entirely my fault that she “entered and turned up to the fucking disgusting thing.”  I may be paraphrasing, slightly.

After what seemed like hours, I had reached Tomintoul, and once Roz and Emma had enjoyed a feed we set off for the daunting climb up the Lecht.  It’s one of those climbs where you can look all the way to the top, and watch as those ahead weave on the road next to others who had dismounted and were pushing their bikes uphill.  Apart from one particular steep section near the start, where the gradient exceeded 20%, the climb was manageable, and the thought of soup and a pie at the top proved worthy motivation.  As did the knowledge that what goes up must come down.

Roz and Emma starting the descent on the Lecht

By this point the wind had picked up, and the enjoyment of the descent was marred slightly by the unnervingly strong crosswinds, but I still managed a smile at the postcard panoramic view of the stunning Cairngorms – through gritted teeth and squinting eyes.  At the bottom of the Lecht you pass Corgarff Castle and Cock Bridge, before facing the final climb of Gairnsheil. 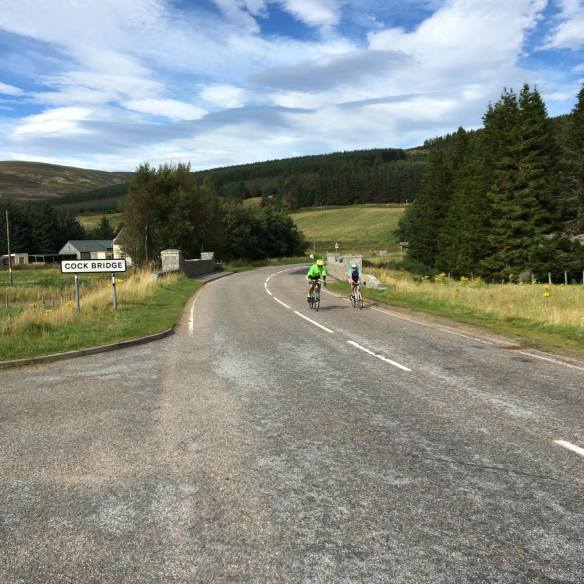 As the road grew steeper I remember asking cyclists around me if we had started the final climb.  The stock reply was, without fail, “I fuckin’ hope so!”  After about 5 minutes of steady climbing, I decided that it must be, and roughly 7 seconds later I hit a false summit and saw the behemoth still to come.  This is where my language turned blue, but what followed, despite warnings that the final climb was the worst, was little more than a steady chug.

At the summit I was soon joined by Emma, and then Roz, whose face told us she just wanted to get to the end, immediately, and then slaughter me by the side of the road on the way back to Aberdeen.  Emma and I clipped in, and started the predominantly fast, downhill stretch to the finish, picking off riders along the way.

One day I hope Roz decides to speak to me again.  Our friendship was a thing of seemingly-unbreakable beauty.