Before open water swimming at Knockburn loch had opened for the season, long enough after the brief stint of swimming upstream for the Red Bull Neptune’s Steps, I entered the River Spey 10k.  In the end, there were four of us reckless enough to have entered – Myself, Roz, Jennie, and Simon – and despite less than favourable training, we all turned up by Saturday evening at the hotel near the start, though 75% of us had decided to drop down to the 5k distance. 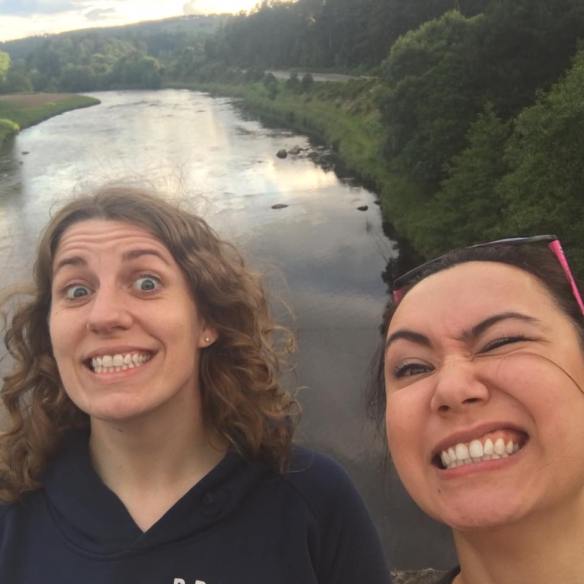 Discarding any semblance of dignity, we were all happy to walk about the room in our smalls with the nonchalant abandon of toddlers, though we very quickly established, upon realising the toilet door was a flimsy shower curtain, that anyone with a case of pre-race nervous bowels would have to make alternative arrangements.  We all have our limits. 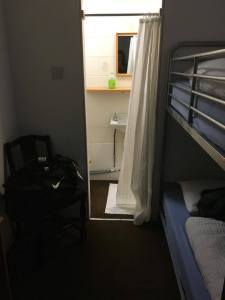 We chose to continue the well-established ritual of having a beer to aide sleep, and Simon had already scouted out a pub (in all likelihood the only pub within miles), which was essentially a shack with a jukebox and a pool table dominating half of the interior (to the point that when two men decided to play, we regularly had to duck to avoid being bludgeoned with a pool cue).  We took our pick of beverages from the limited selection, and sat down to question why we had all decided this was a good idea.  I decided to lift spirits by making some jukebox choices (and refusing to allow anyone to leave until they had all been played), and after a sensible amount of sense-numbing we trudged back to our bunkbeds, where I promptly fell into a slumber deep enough not to notice several late night trips to the toilet, situated approximately 3 feet from my face, separated only by a thin film of vinyl. 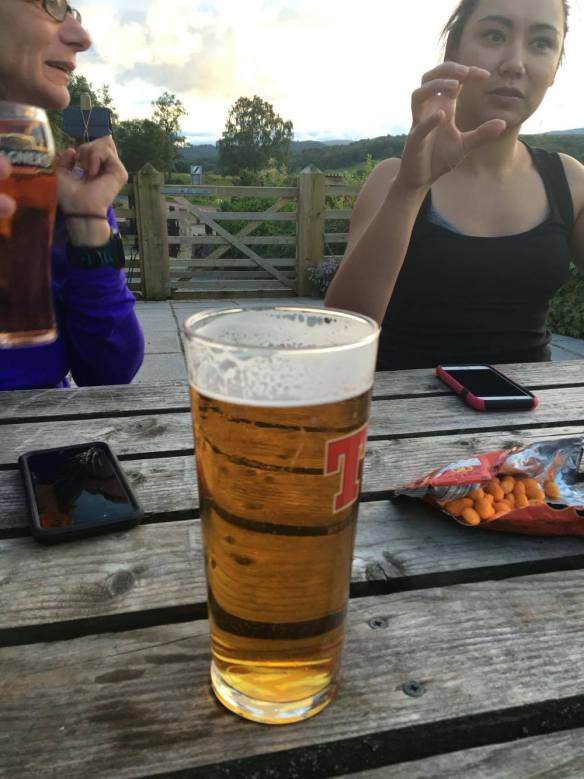 A cacophony of alarm tones heralded the morning of “The Big Fucking Swim”, and we all flopped out of bed in a manner that I would struggle to define as chirpy.  We began the awkward dance of getting into our swimming costumes, and furiously rooting through our bags to ensure we all had the essentials: wetsuit, goggles, swim cap, towel, shampoo, gloves, lube… Feeding off the melange of pre-packaged, high calorie snacks, we attempted to use humour to mask our apprehension, before heading to the cars in a resigned silence.

Once parked up at registration we got our numbers, coloured swim cap, timing chip, and slightly unclear instructions about where and when we would be picked up by the bus for transport to the start.  As the 10k swimmers were being taken first, we found ourselves with plenty of time to mill about.  This moment was the day’s eye of the storm – I found myself in a surreal bubble of familiar faces from my running past who – similarly – had turned to swimming as a way to keep up fitness when injury plagued their running exploits.  I found it bittersweet catching up with their lives (which I once did with alarming frequency) and hearing about their triumphant returns to a sport I once imagined I could never live without.

Eventually the scheduled time for the 5k swimmers’ pick-up arrived, and we were all herded onto the roadside to wait for the bus.  Despite the intrinsic positive vibes of a tribe of people who willingly submit themselves to Scottish open water swimming, cracks were beginning to show as the minutes ticked by; We were all keen to be dropped off at the start.  Or, more realistically (as we eventually discovered), an unmarked spot at the roadside that marked a lengthy march through farmland – even navigating some cows – towards to river bank where two support kayaks were waiting.

Once all the swimmers and the race director had arrived, we cheered on the first 10k swimmers to pass before gingerly submersing ourselves in the frigid river, acclimatising by letting water into our wetsuits with a gasp as we were able to stand in some of the shallower sections.

The start was a rather unceremonious countdown, and then the tumultuous regime of swimming over slippery bodies and avoiding being elbowed/kicked in the face ensued.  Once the field had spread out, I found myself in the familiar rhythm: stroke, stroke, stroke, breathe, stroke, stroke, stroke sight.  I marvelled at just how clear the water was, and was soon mesmerised by the ripples of the sand on the river bed and the silky sway of the long tendrils of plant life pointing me in the direction of the current.

Had the water been warm enough to avoid wearing my neoprene gloves I could have chugged away like this for hours, lost in my own thoughts, gliding through the water.  I was even, momentarily, hit with a pang of regret for not having stuck with the longer distance swim, but this thought was quickly interrupted by the river water enveloping my hands and filling the gloves with so much water that it became a chore to lug through each stroke.  I lost count of the amount of times I was forced to tread water and let the water pour out to regain some sort of efficient form, but it was clear that without them I would be reliving the Loch Lomond horror of having my digits rendered useless so I accepted this as a mild inconvenience.  I wasn’t here to set a punishing pace, but to experience swimming somewhere new.

Eventually I happened upon the aid station, 3km along the route.  I don’t know if the other swimmers didn’t see it (it was around a tight bend) or if they were willing to forego it in order to knock a few minutes off their final time, but I was more than happy to stop for a chat and some pretzels before setting off for the final push.

The first kilometre or so continued along the river, and then there was a brief section where swimmers were essentially forced to run over a shallow section before entering Loch Insh with the finish gantry a speck in the distance.  Without the assistance of the current, this final section seemed interminably long, quite possibly, in part, due to my lousy sighting ability, but I locked onto a swimmer with blue and white stripes on the arm of his wetsuit up ahead and made it my goal to overtake him – a task I only achieved within the final 20 meters of the swim.  With the end in sight, I even ripped off my gloves and stuffed them down the back of my wetsuit to get more purchase on the water with my hands.  The fact that they were numb as I crossed the timing mat at the end only confirmed that I had made the right decision in wearing them in the first place. 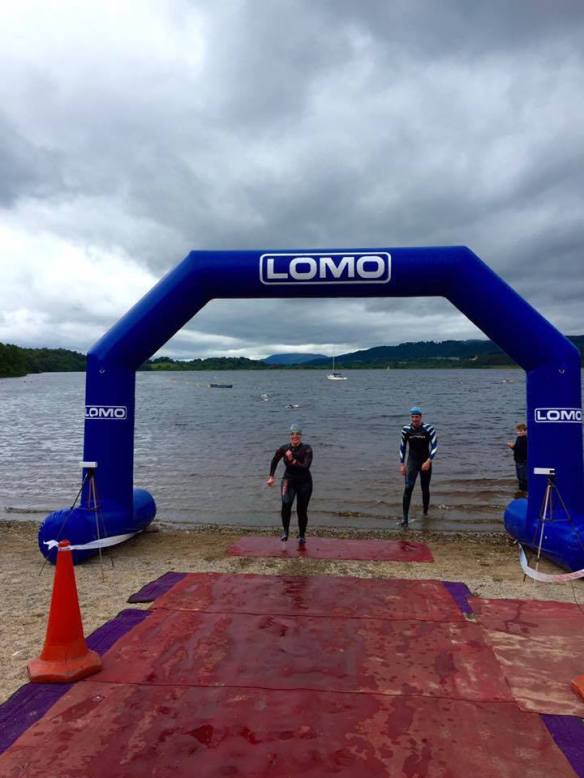 I quickly stumbled upon Jennie (who had won her age/gender category), and we stealthily retreated to the heated registration building where we were served a hot bowl of rice and chilli as we waited for Roz to come in.  Once we were all accounted for, we wrestled our way into the changing rooms, eagerly awaiting a hot shower but being confronted with showers that spat out viciously cold water.  As I was heading straight to a dinner party upon my return to Aberdeen, I had little choice but to wince as I washed my hair and rinsed my wetsuit.

Gilded with frost, encumbered with heavy, damp bags, Roz and I made our way to her car and began the drive home, a little underwhelmed by the entire experience, but glad we had done it.  If I can survive 5km in water that leads to symptoms of mild hypothermia, I should yet manage the 14km swim this weekend in Henley, where the water will feel practically tropical in comparison.

Hi. I'm Rachel and I made 2012 the year I got back into running. My aim was to collect as many success-nuggets as possible so that I could display them in my home and feel smug when I invited people round for board games and such. Since staring this blog, I have picked up a knee injury which has essentially limited my running to nil. What has blossomed in the wake of my love of running is an affair with cycling, which is currently in the exciting and passionate stages of the relationship.

I really appreciate when people take time to read the blog, especially complete strangers. Say hi! Let me know you were here! I'll probably get bored of stalking you in a week or so, so I'm totally harmless. Totally. I am the only person in my immediate family who has never been arrested, so I'm obviously a good apple.

If you want to get in touch, you can get me on the e-mail address below. I'm not interested in promoting your crap on my blog, unless you're going to shout me a carbon bike so my friends can stop ripping on my "heavy" steed: 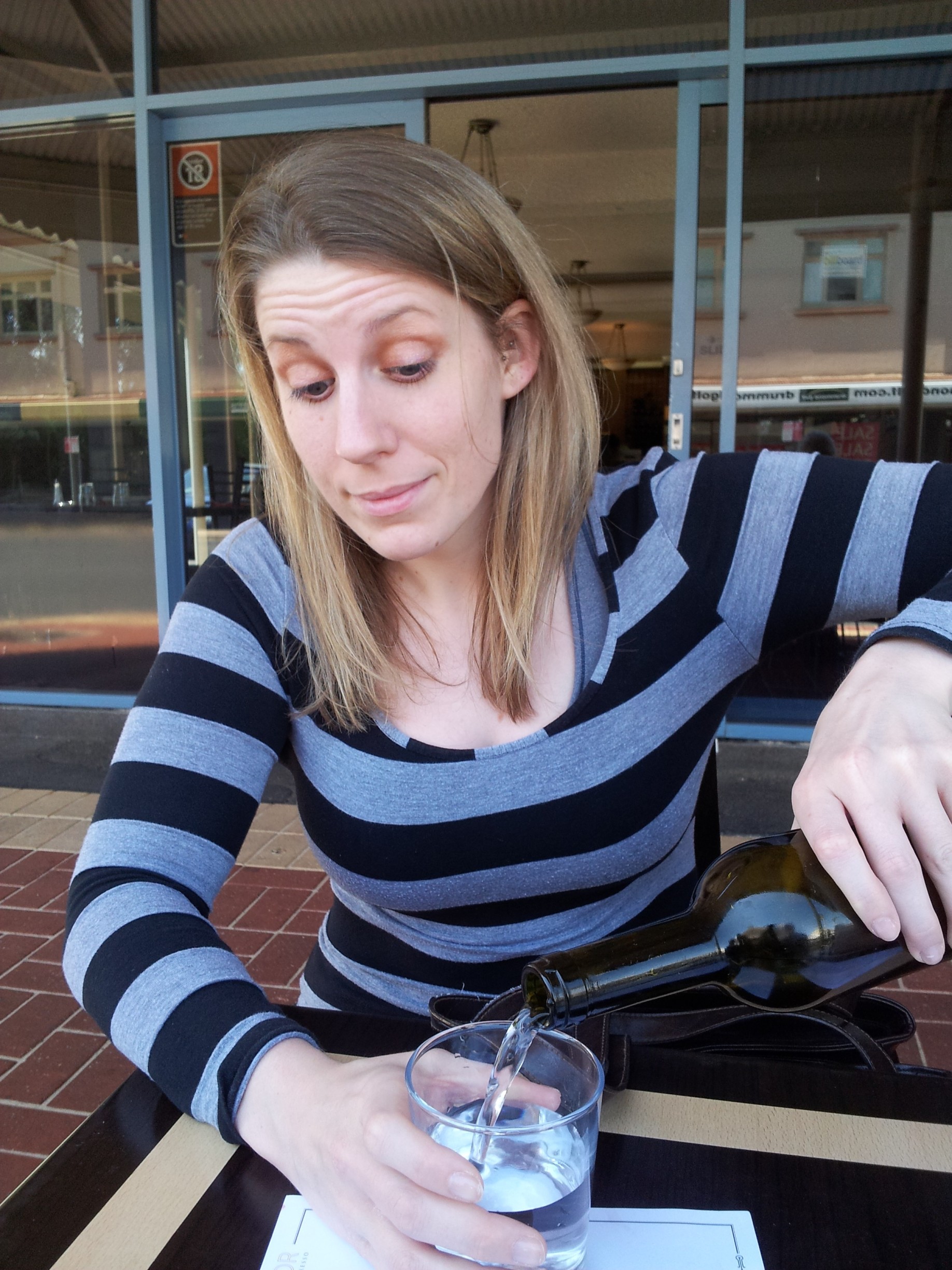