One of the reasons I had enough clothes to justify checking in a bag as well as taking a substantial carry on for a 4 night trip was the Breakfast Run – a 5k fun run starting at Ecole Militaire and ending at Avenue Foch, the same place where we would all be completing 26.2 miles the following afternoon.

The route, printed on the back of the bibs.

The 5k was billed as an ‘International’ event, and all participants, whether running the marathon or not, were encouraged to represent their country during this warm up run.  Challenge accepted.

As I have already mentioned, my 2 travel companions (+ 1 mother) were going all out to represent Scotland.  I had done some very careful outfit planning, however, and  concealed my running attire under black tracksuit bottoms and a sweatshirt during the metro ride to the start, allowing Rhona, Naomi, and Katrine (Naomi’s mum) to bask in the eyebrow raises of fellow passengers:

As soon as we approached the start, I dropped trou to sharp intakes of breath at the sheer elegance of my sportswear:

Overall, I felt I downplayed my nationality a bit, and if I were to return to such an event, I’d aim to really pull out all the stops; themed compression sleeves, bandana, flashing lights, speakers fitted atop an American footballers shoulder pads, riding a horse…  Next time I’ll also require a larger suitcase.

The atmosphere was crazy, and there were lots of people taking photos that I hope to never have the misfortune of seeing, as I was unprepared for the shots (translation: not fully aware I was having my photo taken).  The actual run followed a man dressed as a clown (and cheerleaders) on a tiny purple truck blasting cheesy tunes from enormous speakers.  The pace was relaxed, and everyone was jovial and more than willing to cheer/sing/make complete tits of themselves.  Excellent.

Here are a selection of photos from the run (thanks to Naomi’s dad and Rhona for some):

The Spanish were out in force!

I approve of every aspect of this man’s outfit.

The blue line for the marathon.

Some tower we passed. 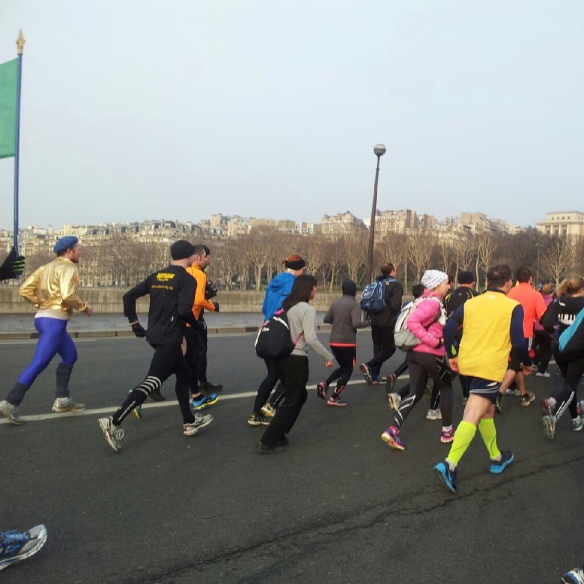 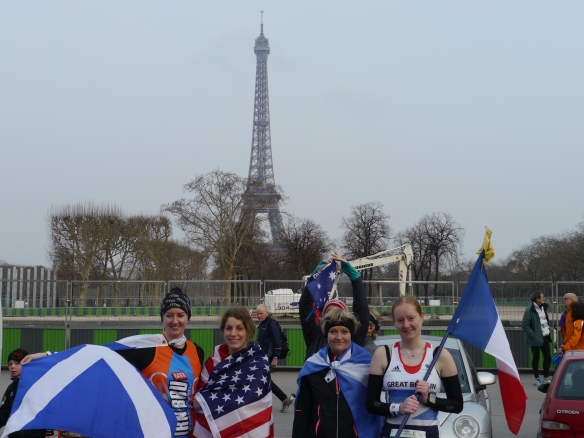 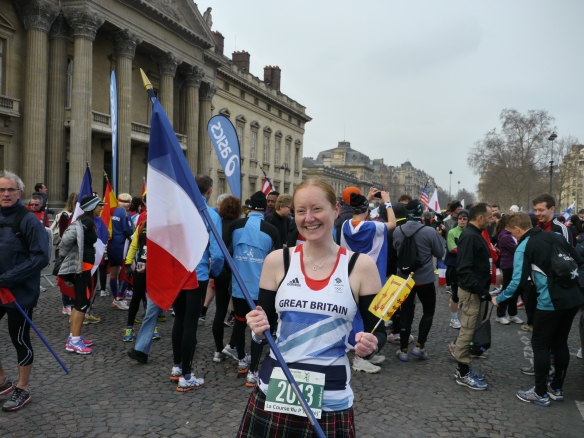 After the 5k, everyone was invited to enjoy a light breakfast.  On offer there were bananas, muffins, tea, coffee, water, and biscuits.  As a non coffee-drinker, Rhona assures me the coffee was ‘not shit’, so the breakfast run seemed like a roaring success!

After a shower and some lunch, we decided to spend the rest of the afternoon relaxing on a (freezing) boat trip along the Seine before an early dinner, and an early night.