Medal: No, but we did get wine and a t-shirt! 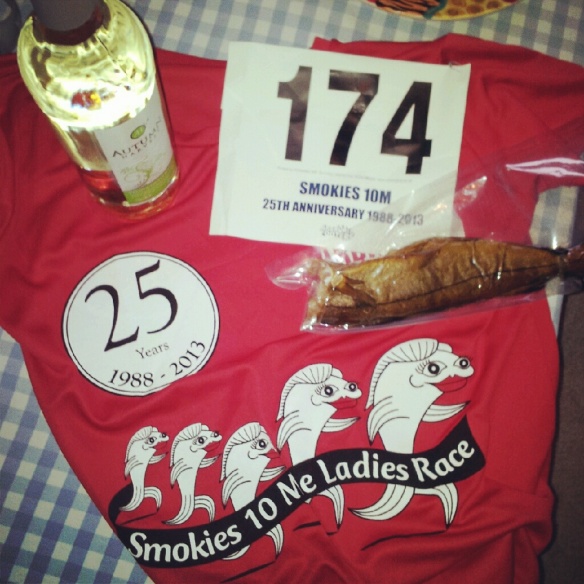 Having run this race last year, I knew that I should be expecting some hills.  The plan for this race was never to race all out (despite my shaky willpower when it comes to reigning it in all the time), because it was basically my long run for the week.  This plan was partly successful.   I’ll start from before the start.

Stuart and Naomi picked me up just after 8, then we swung by Claudia’s to collect her, fresh from her trip to Oslo.  Claudia didn’t have a guaranteed entry, but had planned to pace a fellow runner, Carol, around the course whether she was wearing a bib or not: a noble gesture!  We arrived at the sports hall in Arbroath shortly after 9.  The race didn’t start until 11.  Needless to say, we were not pushed for time, so we took advantage of zero toilet queues, registered (even Claudia), and then found ourselves a comfy patch of hallway and chatted to people we knew as they trickled in. 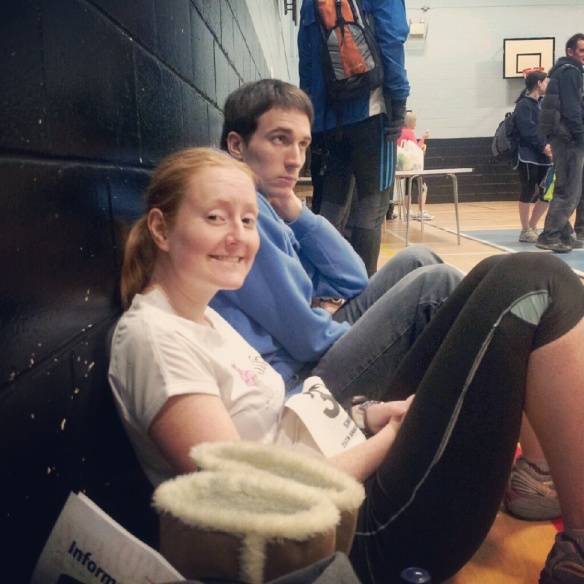 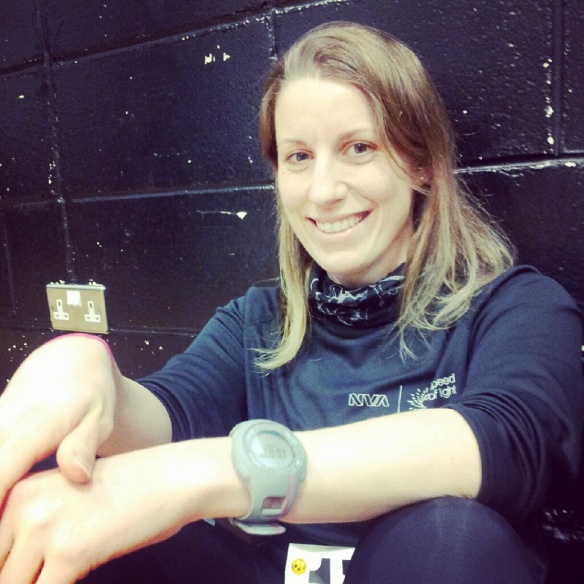 Pre-empting the mass exodus, we left the sports hall with about ten minutes to spare before the start, and headed towards where the start line was last year, partly to become accustomed to the cold, partly to allow our Garmins to find a signal.  We were soon joined by the rest of the runners, and, like last year, failed to hear any race briefing (if there was one), or signal that the race had started, and started running as the crowd moved forwards.  Off we went!

I started next to Naomi and Susan.  Naomi will also be running the Paris marathon, so it looked like I’d have someone else to run around the course with, since neither of us were concerned with time.  Susan was racing, and she wanted to come in under 1:45:00 (totally achievable), so she stuck with us from the start as well.

The first couple of miles were ‘undulating’, and we knew that the bigger inclines were coming up.  We managed to stick together, and had a pleasant chat for half an hour or so when Susan and I pulled ahead.  I told Susan that I wouldn’t look at our time or pace until after 5 miles, and then we could work out what to do about hitting her goal.  It looked like I had become a pacer!

At the halfway point, I glanced down at my Garmin for the first time and noticed we were streets ahead of Susan’s goal time, which I told her, but we didn’t slow down because we were now on the glorious ‘downhill’ part of the race!  Seeing 7:xx staring up at me during what felt like an average effort felt pretty badass (even though, as I said, we were definitely going downhill).

At about 6 miles, my plan fell to pieces.  Up ahead of me I spotted a woman wearing the same shirt as me.  I don’t even know why that was important to me, but the thought of her finishing before me was not OK.  I glanced back and noticed that I had pulled away from Susan a bit, but she looked strong, and there was only slightly more than a 5k left in the race, so I charged onwards.  After about half a mile, I caught up with same shirt (obviously complimenting her on her impeccable style), and then pulled ahead, setting my eyes on my next victim.

I was aware that my breathing was becoming more laboured than it had been for the first 6.5 miles, but that flip had been switched inside my brain that made me crave the high of overtaking people.  Last year, when I ran this race, it was the longest race I had ever done at the time.  I remember being absolutely decimated by mile 8, and thinking the road back to the sports hall would never end.

As I ran past the mile 8 sign, I felt strong, continuing to pick runners off one by one.  I told myself I wouldn’t let anybody pass me, and I didn’t.  I was smiling, the sun came out from behind the clouds – I felt invincible!  Before I knew it, I was skirting the sports hall and running into the muddy finishers’ chute on the field, to rapturous applause (in my head).  I was asked, “Red, white or rose?” as I was offered my goody bag, and then found Ishbel, who remains speedy and crossed the line in a cracking 1:21:38!

I glanced down to look at my time, and despite taking nearly two thirds of the race relatively easy, I had only come in a couple of minutes over my PB!  I didn’t have too much time to think about that, as Susan flew around the corner, and finished in a goal-crushing 1:29:29!  Naomi came in a minute or two afterwards, and we all went inside to discover what delights were on offer this year.  It turns out, quite a few:

Now, I wasn’t completely done for the day, as I had set myself a challenge on Facebook without really thinking it through, where I would do a push up after the race for every ‘like’ I got on a post.  Well, I can assure you that true colours were shown when so-called friends decided to share this with everyone they know, and several strangers helped to push my total up to 50.  With an official counter and photographer, I blasted out the full 50 push ups, on my toes, in a row, before collapsing in a heap for a minute or so, though I am sure my form suffered quite a lot during the final 10:

After my heart rate was back to normal, more and more people we knew finished and came in for something to eat and drink (there really is a decent spread at this event).  We had a section of the floor where we got comfortable and waited for the raffle to begin, holding our race numbers close.  I have no idea what I’m looking at in this photo of all of us after the race:

As I never win anything in raffles, I was not holding my breath.  But when the prizes were nearly all gone, I heard my race number called out, and went up to collect my very own shrink-wrapped Arbroath Smokie, which you can see in the photo at the very top.  Quite a fitting end to the 25th Anniversary of the event, and thankfully, well sealed, since we all had to drive back to Aberdeen.