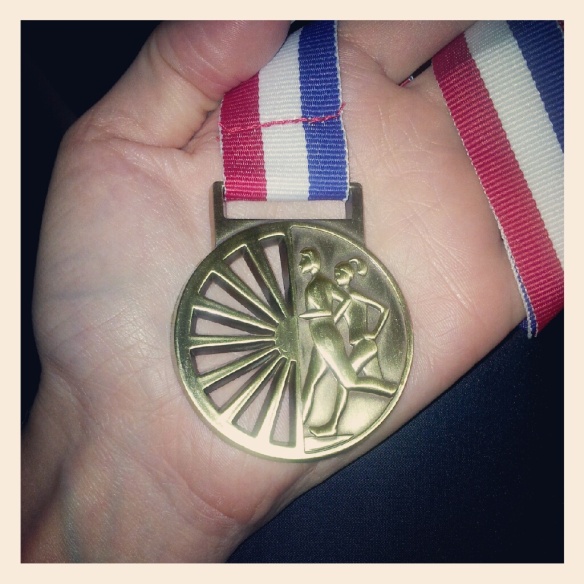 The BRG Challenge is an annual event, held in August, that allows people to choose to either walk, run, or cycle 17 and a half miles from Fraserburgh to Gardenstown.  The walkers set off at 10am, the runners at noon, and the cyclists at 1pm.  I originally signed up to this event to act as a stepping stone between half marathons and the Loch Ness Marathon in 5 weeks time,not that, you know, I’m freaking out marginally or anything.  Little did I know that I would have already completed an 18 mile and a 20 mile run beforehand!

The course was described to me as ‘undulating’, which in no uncertain terms translates to ‘non PB conditions’, so without the burden of time pressure, I had decided just to enjoy this and treat it as a long run.  Obviously, long runs require carbalicious dinners the night before, so I had some homemade pizza with Grant.

So delicious. Even looking at this photo should make your pants tight.

After a good night’s sleep, my partner in crime, Ronnie, picked me up at 10 and we headed towards Fraserburgh after a quick stop at Tiso to pick up some energy gels.  We arrived at the starting area with about half an hour to spare where we registered and got our stuff ready.  This was to be my first race with my glamorized running bum bag, and I was packin’.  There was absolutely zero chance I would go hungry during this run.

We set off on time, probably helped by the fact that there were very few of us running (Results indicate there were 42 runners, although this doesn’t take into account the relay teams).  Immediately I regretted the bag.  It weighed way too much.  But it was too late to turn back.  Having Ronnie as a running buddy was good, since he’s from Fraserburgh, and pointed out all of the major landmarks like where his ex works and what I can only describe as the least enticing night club in the world: 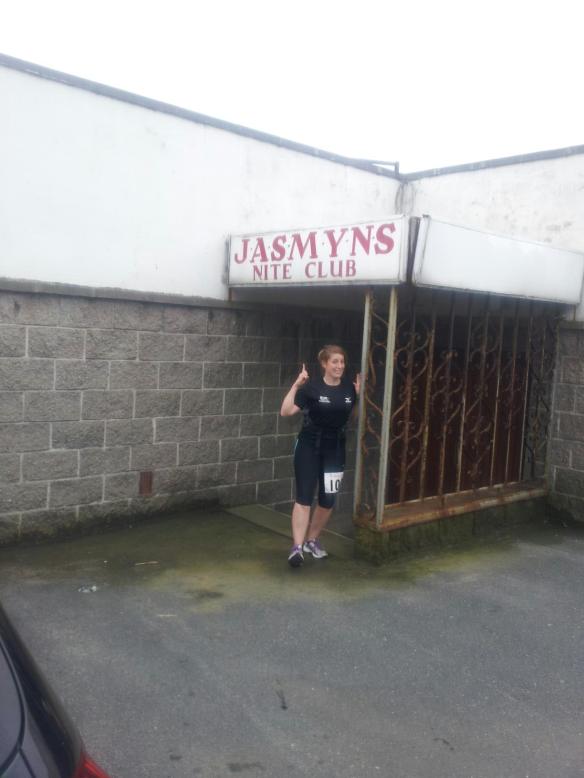 Side note:  If I have time to take mildly comical photos, I am clearly not aiming for a time that would give Usain Bolt shivers.

Anyway, the first 5 miles or so were relatively flat.  We followed the coastline and the runners quickly spread out, so I’m glad Ronnie had decided to keep his race slow and steady, or I would have been running pretty much alone for 3 hours.  After 5 miles, we started climbing.  A lot.

The course remained ‘undulating’ (I hate that word), until the end.  After about 8.5 miles (and about 1:25), the first ridiculously fast cyclists whizzed by.  A minute or so later, another group.  And for the remainder of the race, people overtaking on bikes was a constant fixture.  It was kind of comforting.

What was not comforting, however, was coming across this sign:

That hill appeared to go on for ages.  The cyclists, at this point, had dismounted.  If only I had known that this was just the beginning….

Still, through the hills, and wind, and rain, the marshals/volunteers were always smiling and encouraging, and the plentiful water stations were stocked with jelly babies, orange slices, bananas, water, diluting juice, and chocolate bars.  Amazing!  And since I had company the whole way, I didn’t drain any of my mp3 player’s battery (even though I had 3 whole albums put onto it last night that I was dying to listen to).  To be honest, most of the time I was smiling (apart from the grimacing after mile 16 due to an extreme tow blister situation), and so was Ronnie:

NB: This photo was taken before Ronnie’s left nipple starting bleeding all over his shirt.

As the miles ticked by, and the foot pain increased, the sun started to peek through the clouds.  The mile 17 marker, had a been male, would have given me a semi.  It was nearly done!  We ran, downhill, steeply, towards the harbour at Gardenstown and I would be lying if I said I didn’t beam when I saw the finish line.

Crossing it together, Ronnie and I accepted our medals (mine was from a former pupil, which was odd for both of us), and then Ronnie found his friend who was there to give us a lift back to Fraserburgh.

Trying to move from one car to the next after sitting for 20 minutes was pretty hellish, and leaving Ronnie’s car and climbing the stairs to my apartment was also unpleasant.  But the hot shower once at my destination was awesome.  So was Grant bringing me a chocolate croissant 10 minutes later.  And the Nando’s for dinner rocked my world (and nearly blew the roof of my mouth off).

Tomorrow?  I’m helping Grant move into his new apartment.  It’s all about building the guns.  I hope everyone is having a good weekend of running so far, and I’ll leave you with the elevation profile of the BRG Challenge.  See if you can spot the deathly inclines….